It was sunny on Saturday and Eric wanted to do some filming. He had an idea in his head about a video where we will shoot in front of the melting waterfalls. We bundled up and he slung the tripod and his guitar on his back. Halfway through the field we were sweating from the effort of hiking through the snow. But we knew it would be colder in the forest. We didn’t get much footage, but we probably should have turned on the camera while we scrambled up the steep incline, covered in a sheet of ice. It took me ten minutes -literally ten minutes to take one step in one of the more slippery sections. It was ridiculous. Eric was laughing at me. I was laughing at me. I think I heard a crow laughing at me. By the time we got to the waterfall we realized there was no way we were getting close to it without falling off an ice cliff. It was still frozen solid anyway, not even a trickle of water. It was mildly depressing to know how much longer we have to go before things start living again.

We had a meeting in the afternoon, huddled in my office which is currently the sunniest room in the house. We talked about the farm, the band, my business. Sometimes it’s difficult to know where to go next. How to proceed when you’re making everything yourself, from scratch. It’s easy to get worn down simply by the process of making. And yet, there is still direction than needs to be considered. Deadlines to create. Outlines and lists and goals. “You’re the one who always tells me not to worry,” Eric said. It was true. Keep your compass aligned with what you know is right, and just keep moving. 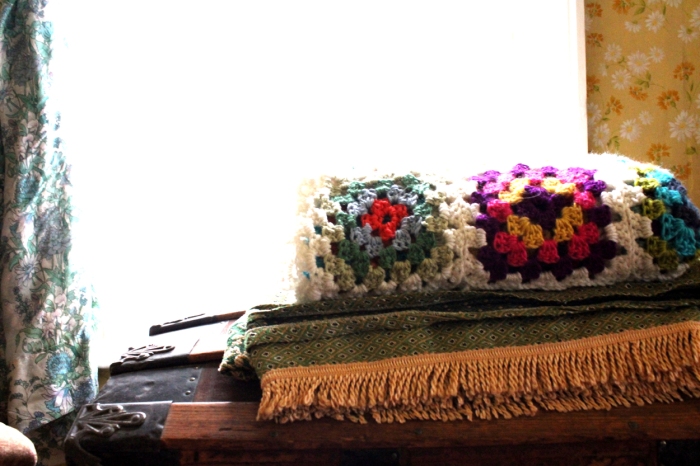 Prior to our meeting I sat at the dining room table. Eric was pacing, having just gotten back from working a Sunday. “I have a list of projects,” I said to him. “But I just don’t want to do them.” So we poured ourselves a glass of wine, plugged in my grandparents’ old television from the 1960s and watched basketball. I felt normal and it was wonderful.

But normal went out the window when I realized it was four o’clock. I bolted out of my seat, hobbling quickly down the hallway to find my camera (the mild injury was the direct result of our icy video shoot). “I need to take my daily picture of the back yard!” I looked and sounded like a crazy person. But Eric didn’t seem to notice. “Oh! Is that for your time lapse project?” he asked with excitement. Yes. It was.

I knew the snow MUST be melting, but I could no longer tell. So I started taking a picture of the backyard every day at 4 o’clock so I could chart the snow’s progress. I am happy to report that it is, indeed melting.

P.S. As I said, we were not very good at taking photographs on our waterfall walk, focusing instead on simply staying upright. So here are pictures of the incredible blanket Mom made for me. The cold of a hundred winter days focusing on the vibrant colors of spring. Like a three year old I have been carrying it around with me wherever I go. Thank you Mom.

2 thoughts on “frozen falls and blankets”