The critters are back! (I make it sound like I’m happy about this. I’m not). They start to make you feel a bit crazy after awhile. I’ll just be about to drift off to sleep, when Eric shouts “Did you hear that!?” I haven’t heard anything but he’s sitting up now, his ears twitching (which I can’t see in the pitch black but I imagine are flicking like a cat’s). “Coyote?!” I ask. I’m sitting up now, straining to hear the coyotes howling in the woods out back. “No. Red Squirrel,” he says. I lay back down.

We did have a family of red squirrels living in our walls one year. It was bad. I remember in the spring hearing the thud of one of them landing on the roof outside my office window. I scurried over to look out at it. As if my seeing it would somehow shame it into moving along. “Don’t you see we’re good people!?” my eyes would say. “Why do you torment us?” But when I looked out it wasn’t a red squirrel. It was seven red squirrels. And six of them were so tiny you could have held them in your hands. When they saw me through the window staring at them they stopped. The babies were in a line, gripping each others tails like they were mountaineering. “Look right at her,” I could hear the mama red squirrel saying “Give her the most pathetic, most sweet, most innocent stare you can muster.” (Which can’t be hard for a baby anything to do. And it wasn’t).

My eyes were locked with these critters. They WERE cute. And they were living in MY walls. My walls…how lucky to have these cute little things living in my walls. Wait, no! I hate you! We’re enemies! But you’re just so cute… I walked away from the window, defeated. They’d won. 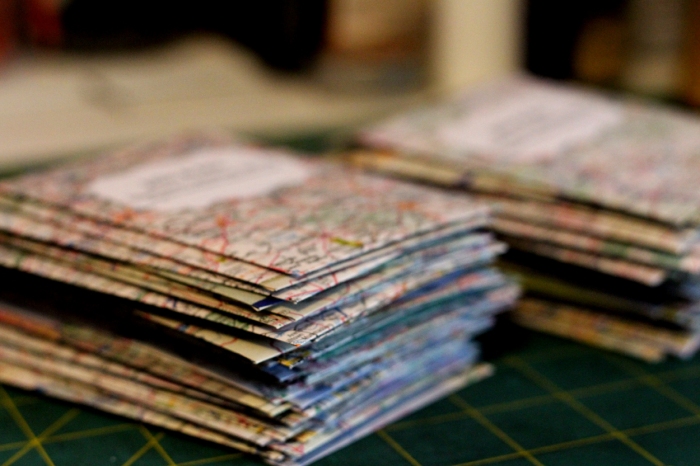 “We can’t close the hole up until the babies are old enough to move out,” I told Eric. I had done extensive research on the internet (which meant I googled “red squirrels in walls”). When Eric questioned my rationale (and my allegiance after I described the baby red squirrels as “intelligent”) I was able to explain that the mother would do anything to get to the babies. Which might mean chewing new holes in the house. He was in agreement, and a few months later we filled in whatever holes we could find with expanding gap filler and then nailed over them with hunks of scrap wood.

But no matter how many holes we find, there always seem to be scutterings and scrabblings in the walls. For an entire spring, summer and fall we had a chipmunk who liked to hang out in our kitchen, mixing cocktails and baking banana bread. To this day I still walk in there and expect to see a critter scrambling to an invisible hole beneath the cupboards. Leaving his martini half finished on the table. He would have eaten the olives.

It is an odd feeling -the anticipation of knowing you will be surprised by an animal every single time you walk into a particular room. And then, still being surprised. As if you didn’t know it was coming. We finally caught him in a havaheart trap and I (stupidly) hiked out the woods and let him go. He hopped a few feet in the other direction and then turned around and followed me down the path, all the way home. He was back in the kitchen the next morning.

The next time we caught him we loaded him in the car and drove ten miles and across a body of water like Google told us to. We let him out near the Reservoir (a week before Hurricane Irene) and I worried about that god darned chipmunk throughout the whole storm. I still think about him when we drive by. Scanning the wood’s edge for his offspring.

I think we’ve got the four legged critters under control, now we’re trying to control the bats living in the belfry. Again, we fear they’ve already had their babies and if we lock them out the babies die. Not only does this feel cruel, but the parasites that arrive because of decaying dead bats are often worse than the bats themselves. It’s amazing what you can learn on the internet.

So for now we’re closing up all holes but one. Once the babies are grown we will install a bat trap -which is similar to a lobster trap in reverse. The bats can fly out of the house but can’t fly back in. I remember being a little girl watching my dad play catch with the bats. He’d toss up a pebble into the air. A bat would swoop down toward it, thinking it was a bug. It would catch the pebble in its wings and hold it for a moment. When it realized it was inedible the bat would release it and let it go. It seemed remarkable to me. Now I watch them dive down to catch bugs I can’t see until they’re sucking my blood. I’ll admit I have an irrational fear that they will get caught in the bird’s nest that is my hair. But they never do. Incredible.

PS The photos are from one of a series of spring wedding favor orders. When it’s raining (like today) I get lost in the folding and gluing of envelopes.