My neighbor wandered over the other day and asked Eric and I if we had seen any B’s.
At first we thought he was speaking in code.

To be honest we hadn’t thought about it.
When you run a farm you ride a hard line between being perceptive and being paranoid.
In the beginning I was paranoid.

After living through about four years of paranoia I realized that there’s really no reason to be paranoid. The things you’re paranoid about never end up being the real problems anyway…

Of course there are situations that verge on calamitous, but when you’re growing so many different varieties in such close proximity to one another, the bugs never get unruly. That’s what’s amazing about bugs. They typically prefer one or two types of plants. As long as you plant enough variety, you’re sure to have at least one successful crop. And once you understand each bug’s personality and habits, they’re relatively easy to control naturally on a small scale.

But the bees…I hadn’t thought about the bees. I know this is strange since I’m a seed farmer and the bees are pretty essential to…well…life as we know it. Any one who has been following colony collapse disorder knows that the health of bees has been in startling decline. Was I naive to think that because I was a pesticide-free farm that I would have wild bees forever? That when the rest of the world was silent my farmstead would still be humming? The eco-system isn’t tiny parcels of land made up of individual bugs and creatures. It’s all one living thing. All connected. Even though I know this, I thought that for some reason, because I was doing it the “right way” that I would be spared. But now, I’m worried that I was wrong.

Each year I battle with the western side of the fence in the East Garden. When we first put it up I decided to plant perennial sweet peas along its base. This is a stunningly beautiful display when the sweet peas are in flower, but as soon as they start going to seed it’s war. I can hear their dried seed pods springing open at all times of day, thrusting their seeds into the vegetable beds. No matter how often I collect the seed pods I can’t reach them all. Every year I am weeding perennial sweet peas from the soil. Their deep, stubborn roots are never fully eradicated.

The sweet peas have been in flower for several weeks now. The other day, as I never do, I checked on their pollination. I grabbed a stalk that held eight brown shriveled post-pollination flowers. They all fell off in my hand. Not a single one had formed an early seed pod. I tried another…same thing. Suddenly my ears perked up -the way they do when the power goes out and you realize that what you thought was silence was really a continuous hum. Everything was silent. No buzzing. No humming. In the early morning foggy light I had the overwhelming and eerie feeling that I was dreaming. That I would wake up and tell Eric about this strange dream I had, where there were no bees and my flowers weren’t being pollinated, and there were no seeds. But I didn’t wake up. I came up to my office to write this blog post instead. 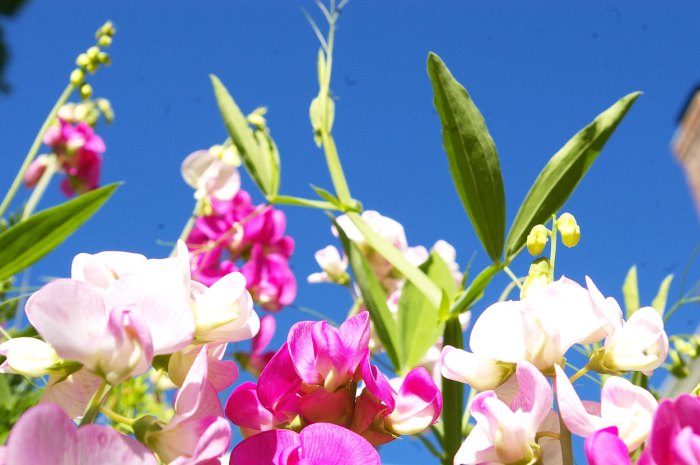 This discovery is still in the early stages. All of the calendula I checked had been pollinated (though some not as vigorously as others). We have more blueberries than ever. There are raspberries, and a significant amount of peaches. I hope that in a few weeks or months I will be able to look back and say “remember that year I thought there were no bees?”

But sometimes it’s good to be paranoid. It wakes us up from our haze. It reminds us to take nothing for granted. Not flowers, not fruit, not vegetables, not food, not seeds, and especially, not bees.