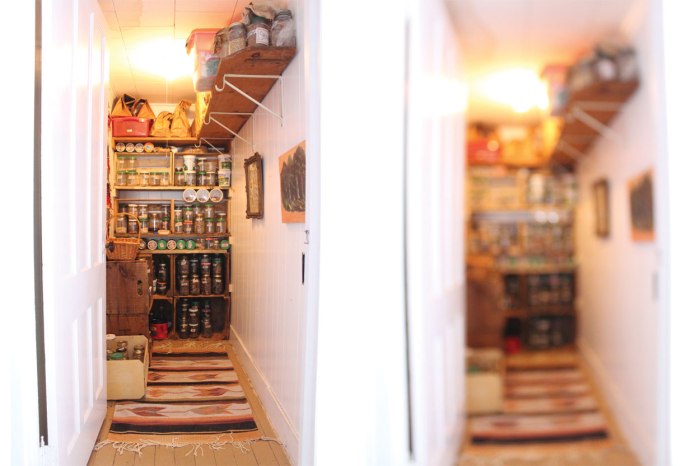 I started selling seeds because I had a closet full of them. I started the gardens because we wanted to be “self-sustainable.” I realize now that self-sustainability was a goal as impossible as it was vague. What does it even mean? Back then (to me) it meant that we would grow our own food. All of it. Simple. After trying to actually do that I am now satisfied that we only grow our own produce and herbs. I am okay with buying things like flour and butter at the market. Why? Because I’m only one person. A human at that. I tried growing wheat once by hand (sustainability in my mind did not include farm tools that used petroleum). This did not work out well for me or for my sustainably-grown flour dreams. But I appreciate flour more than ever before. Except I’m gluten intolerant. So I’m currently in a love-hate relationship with flour. That’s a story for another time.

In order to save the little money we had stashed away from teaching in Thailand (which trust me, was not much since the back then the baht was trading 40:1) I started saving seed. Compulsively. This came somewhat naturally to me as my mother saved seed when I was little. Our basement was filled with pillowcases of marigold seedheads which I sometimes mistook for Halloween candy. (Remember when that was cool? Pillowcase candy bags on Halloween? Maybe it’s still cool. I’m so out of touch). Before I knew it, I had way more seed than I could ever use myself. So I started selling it to make a little extra money to support the farm. Except seeds don’t really support a farm, but I wouldn’t find that out until much later.

I’m digressing. I think. The real point I wanted to make here was that expanding my business in an environmentally responsible way has been extremely difficult. In order to really earn money you need to streamline. You need to be productive. Henry Ford! I wasn’t going to build an assembly line for my seeds. No. But it was taking me an awful lot of time to make each envelope by hand. HAND! Henry Ford would have laughed right in my face. But it was the only way I could figure to sell my seeds without the upfront cost of buying envelopes (am I boring you? I’m kind of boring myself, but this is my life! Isn’t it boring?!) Besides (no. I won’t stop boring us), making these envelopes by hand out of recycled materials was a check-mark in the column of THE ENVIRONMENT. I was doing good things.

But then business started getting busier. I expanded the farm. And then expanded it again. I started making soap and added it to my shop. I was selling more. A lot more. That’s good, right? But I realized I was not using my time wisely. When all was said and done I was making less than $2 (close to $1.60 to be precise) for one packet of seeds. I didn’t understand the concept of profit or paying yourself for your time. All I knew was that it was taking me 20 minutes to put together an order for one seed packet. One. And then 20 more minutes to get it to the post office. That’s 40 minutes for less than $2. And that doesn’t even include the time it took to grow it. Or collect it. Or store it. Yikes. That’s sweat shop material. And I don’t know about you, but I’m not a fan of sweat shops.

I struggled with this a lot. I increased my prices. I knew it would drive some people away (have I driven you away with this post? I’m sorry. Really.) A couple of years ago, after much internal debate I finally decided to sell some of my seeds in kraft envelopes. And I felt SO GUILTY. Guilty for not having enough time to make all of my envelopes by hand for a reasonable price. Guilty for adding more waste into the stream. Guilty for the energy consumption these envelopes were made with and arrived to my door with. But I had to admit, it was saving me time. I was spending more time working on the farm and growing the business in (hopefully) responsible ways. And I was selling more seeds -which meant that there were more responsibly grown heirloom seeds out there in the world…

I realized that if I kept on the sweat-shop trajectory I was getting close to calling it quits. (Not really, but I’d like to think so… because who would be so crazy?) Either way I was burning out. Burning out making pretty envelopes while growing beautiful flowers, vegetables, and herbs!? That’s insane! I’d much rather burn out from being a long-line fisherman or something that seems true burn-out worthy material. I was focusing only on the health of the environment and ignoring my own health. And by the way, I am part of the environment. And so. are. you.

No one can be a good steward if they’re burnt out, whether it’s from long-line fishing or envelope making. “I’m using so much of my own energy making envelopes, when I could be using that energy to dig more dirt…” I thought to myself. And when I put it that way, neither situation sounded particularly like Henry Ford or Rachel Carson would approve. But I’m going to move on.

Truthfully, I don’t know where I’m going with this. I’m sorry if I lead you to believe there was going to be a payoff at the end of this post. I just needed to get it out. I don’t have the answers. I’m trying as best I can to continue to expand my business while also keeping in mind that many of these expansions have environmental costs associated with them. I know that if I wasn’t so concerned with the environment there are a lot of decisions I would have already made and directions I would have already gone in. But concern for the environment makes me think harder about how to solve these problems. I am not perfect. I have given-in to kraft envelopes. But not little plastic bags. There is a line I draw in the sand (clay here, actually). It makes things more complicated. It takes more time. But it’s important to me.

In the end some people might question my environmental ethics. Some people have. I got an email once from a woman accusing me of (I’m putting this much more gently than she put it in her two page email) harming the health (including sexual health) of orangutans because I use palm oil -albeit organic and sustainably harvested palm oil- in my soaps. The palm oil debate could last many pages, and frankly I don’t have the heart to get in to it now. But I do take these criticisms seriously. And sometimes they make me cry. But in the end I weigh everything and do what I think is best. Not just for the earth, but for the world -which includes both orangutans and the humans who write nasty emails to try and protect them by making other humans cry. I know I’m doing the best I can, and I’m doing it as thoughtfully and as conscientiously as possible.

2 thoughts on “to the extreme”