It feels as if I haven’t written here in months. It was only last week, but lately my weeks have been feeling like they occupy two to three times as much time. My desk is clean now because it rained yesterday afternoon -though not nearly enough- and I organized for the first time in months. The orders and projects are finally out the door and off the tables and desks and flat surfaces of my studio. My calendar is perpetually open to August. Planning ahead has never been a strong suit of mine, though I guess I shouldn’t give myself so much grief because more often than not it seems my calendar is never open to the month it actually is. This is confusing and also not confusing at all since the past month has felt like three.

All day yesterday I wore a tank top and sweated right through it. I drank quart after quart of mostly warm water while I planted dry beans and bush beans, zinnia, cosmos, and butternut squash in the far flung reaches of all the gardens. But like I said -it rained, and then the breeze that came through didn’t feel like the oven door was left open, but instead, the refrigerator. Weather is so strange. And it makes me nervous.

There’s not much one can do about the weather, except stop eating meat and driving cars and using electricity and refusing to drink almond milk. We all do what we can -hopefully. I run an organic farmstead. I don’t commute. I compost. I grow most of our own produce. I drink tap water from Ball jars and endure endless comments about why I’m drinking moonshine. But still…I eat avocados. I live in a big, drafty, old house. I use a lot of bubble wrap. I really, really, really like sushi.

I just read an article about a couple who tried to start a commune in Pennsylvania in the 70s. They lived on 63 acres of land and one of them scythed 7 acres of wheat by hand. Some of us do more than others. 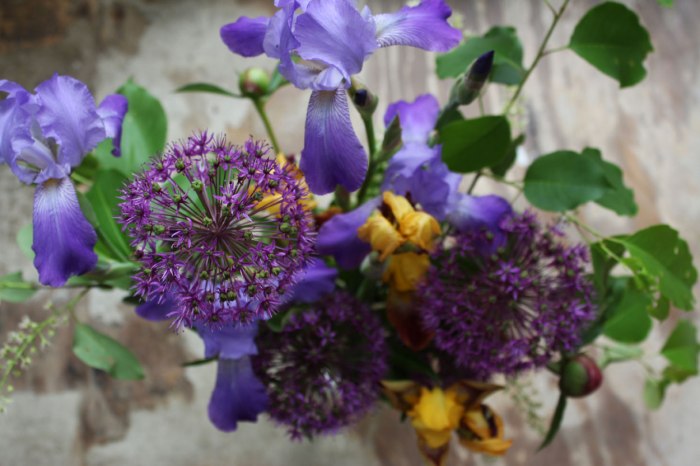 It rains too much in some places and not enough in others. It’s colder for longer in the Northeast, and then all of a sudden it’s summer. I’m hoping this is not a trend. Simply an anomaly. By now I’ve lived through eight farming seasons, and this will be my ninth. I’ve lived through droughts and floods and perfect years for growing. Last year we had poor pollination. This year our weeping cherry and our dogwood are nearly dead because of the harsh winter. We hardly had any blossoms on our apple or peach trees -despite the fact that last year was an off-year too.

There’s only so much stress that humans can take before they collapse, and the same goes for plants. I’m already seeing the signs of stress on some of these water starved creatures. Stressed out plants are more prone to disease and are less likely to be able to fend off predators. Just like us. Maybe I should lead a plant-meditation in the gardens to help ease the stress. Really, it just needs to keep raining.

One thought on “A Different Type of Stress”