This might be a boring post. (Disclaimer). You might skip over all of the text and just look at the pretty pictures. That’s okay. But if you geek out over home improvement projects, I’ve written about this one here in all of its boring and detailed glory. Not so detailed that you want to gouge your eyeballs out, just detailed enough where you might sort of understand what we did. There was a lot of measuring and cutting and screwing and hammering…for a year. A year of measuring and cutting and screwing and hammering. I tried really hard to make this post funny, or interesting, but some things just aren’t funny or interesting. What is funny or interesting is that you’re still reading this. Thanks for that.

Last March I started this project. Some people start projects and then they finish them. I think that’s pretty awesome. But I’ve never been the type of person to start and finish a project right away. I get distracted by other projects. I’ve created a life with many balls in the air at once, and when I get bored of one, I move on to another. That also means things take awhile. My projects lately have been testing my knowledge and skill. The longer I have a chance to sit on them the better the chances are that I’ll actually do it right. So that’s how I’m looking at it.

This house is the wildwest. When I pulled down the drop ceilings a year ago I uncovered exposed beams, but I also uncovered that these exposed beams had been cut into -in order to recess the furring strips that the drop ceiling was attached to. AND the plaster walls stopped at the bottom of these exposed beams (something I’m only realizing now I never documented in photograph form because it was too frustrating and infuriating and at some point I feared it would look that way forever so what’s the point in cataloging it). Fortunately for me, Laura Andrea Harris captured it in this lovely bridal portrait after Eric and Woody stuffed it with insulation (I’ve brightened the top portion of the image so you can see the lack of walls in all their glory).

March gave way to September as it always does. We were bogged down with the album release and the farm. On a few spare occasions we picked away at repairing the walls. Because nothing was square, and each of the two-dozen sections of wall were of varying sizes, we measured and cut each piece of drywall individually with all of their incredulous nooks and crannies.

First a piece of scrap wood had to be screwed into the left beam and right beam of whatever section we were working on -in order to give us something to screw the drywall into. This took a year. One full year. We worked on it 4/365ths of the year, but it still took a year.

The finale came a few weekends ago when we replaced the largest section of missing wall to the left of the staircase, as well as repairing and adding new molding to the top of the stairs. You can definitely still see the seam that runs to the left of the molding at the top of the stairwell (I’m no master with mud), but since the rest of the house is filled with bumpy plaster it seems to fit right in. Besides, we weren’t starting off with straight edges to begin with and you can’t make a crooked thing straight, so, there you go.

The molding, on the other hand, you don’t even notice -though it took a day and a half to complete. I suppose that’s the sign of a successful woodworking job, you don’t notice it unless you know what you’re looking for. This was such a mess before hand (and you’ll have to take my word for it because it was such a mess that the thought of taking a picture to document it made me cry), that I never thought we’d figure out how to do it. Now it looks like we didn’t do anything, and when we point it out to my dad (an incredibly talented woodworker, who saw what it looked like beforehand) he’s not quite sure what to look at. That thrills me to no end.

Suddenly that hour of my life when I cut, and re-cut, and cut again, and stuck into a vice and used a coping saw and measured, and remeasured, and had to cut again because I accidentally cut the wood in half -a piece of wood that was literally 2 inches long (2 inches!) to get it to fit into a tiny crook of decorative molding on the top of the banister pole… it was all worth it.

I thought long and hard about sanding the bearing beams or filling them in, but then my brother reminded us that further weakening bearing beams by sanding them was probably not a good idea. He suggested filling them with wood putty, which was a great idea. But then three straight weeks of painting a ceiling everyday caused such a crick in my neck that I worried this head tilt I acquired would become permanent. So I decided that for the time being I’d leave them as is -another uncovered piece of the history of construction and deconstruction of this house. Maybe someday I’ll fill them in, but for now I don’t mind them, and neither does my neck. 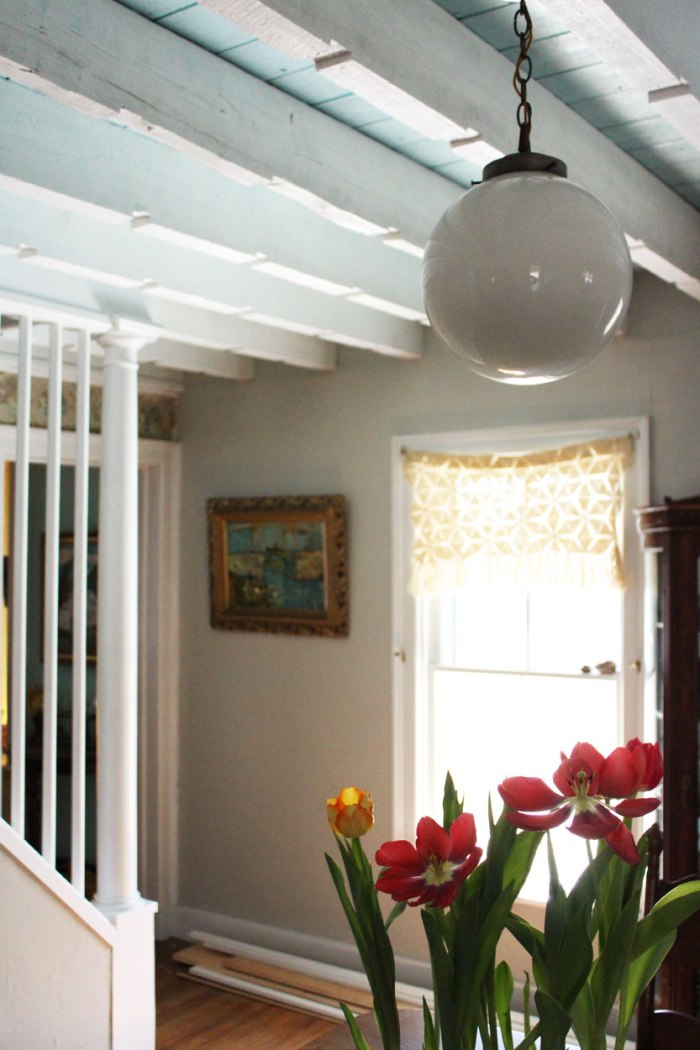 I painted the beams white and the ceilings haint blue to match our porches. The lighting fixture was hard wired, and once I’d pulled down the drop ceiling we saw what a fire hazard it was. We replaced the junction box and rewired it (blah blah blah) removing the stained glass shade which really brightened the room up and made it look way less like an Italian restaurant in New Jersey in the 70s. 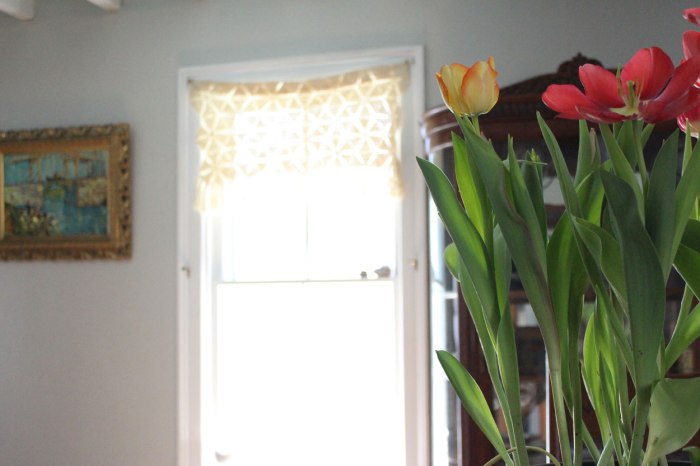 Since we were taking such care and detail with everything else I contemplated doing the walls the ‘right way.’ As in, not painting over the wallpaper for a third time (shameful, I know, you don’t need to tell me). But when I started removing the wallpaper, the plaster came with it. I was not prepared to re-plaster every single wall. Frankly I’d about had it with this project at this point. I decided I’d leave the right way for another day and paint over the wallpaper again.

The only section of paper I knew I had to remove was in the stairwell, since it had already mostly pulled away by itself. When I sprayed and scraped off the top layer I discovered this mosaic of four layers (!four layers!) of historical paper. So there you go. No one in this house ever removed wallpaper. Now it is not laziness, it is ancestral tradition. The mosaic of paper was in the perfect coloring for our ceiling, and the paint I’d picked out for the walls, which I’m calling ‘drywall grey’ but is actually called something more elegant like ‘brushed aluminium’.