I once got a C in a middle school music class. It was for an assignment where we were supposed to listen to the classical music station and write about a song we heard. The teacher didn’t specify that she meant we were supposed to write about the technicalities of the music. So I didn’t. To me the string section sounded like flower petals falling from trees and the melting of a creek. The crescendo of violins evoked the first emergence of green spring bulbs. I heard the first insects rising up from their winter hideaways. I heard animals blinking in the light. The first thunderstorm of the season. When the piece was over I learned it was Vivaldi’s Spring and I was flabbergasted that someone could actually make music sound like flowers on purpose. But I got a C on the project because I didn’t mention violas specifically. I think that really stuck with me.

Our video for our new single “Soon” came out last month (you can watch it HERE).  We’ve been making music together for so long that it’s difficult for me to put it into words -to verbalize how we work and what we did and what the process was. If I could explain music, I think, I might not bother making it. It’s a choreographed dance for your ears instead of your eyes. I think this video is the visual representation of what we do with sound. Waterfalls and bouquets, and wild gardens that are actually precisely maintained. Free-form dances that have been scripted and also improvised. Flower heads popped from their stems and tossed into tubs to swim with and steep in -submerge yourself in. This is what our music is supposed to sound like.

We spent many weeks leading up to the shoot conceiving our shots. Finally we had a day where all of the necessary components aligned. There was vibrant sparkling light, Eric was able to come home early from work for a weekend of shooting, and I was feeling confident, carefree, and most importantly positive -mindsets that are so essential for being in front of the camera. I am not comfortable in front of the camera. Mostly I feel incredibly awkward. There is a lot of B-roll footage that includes me hesitating mid-dance because a neighbor walked by with their dog while Eric was in the middle of coaching me to imagine I was playing with an invisible ball. There’s a shot in the creek, I’m standing on the edge of a waterfall and Eric is shouting up to me to try and act confidently after I’d visibly slipped into self-consciousness. I try to obey his direction when I stop, mid dance, because I suddenly realize a giant blue heron has been watching me, and when I started dancing confidently, I scared him away.

We had one chance to capture the shot of me stepping into the bath wearing the pink dress. It was Sunday evening. All light was fading, and poor weather and deadlines were impending. There are Lots of b-roll shots of me choking after I dramatically submerge beneath the floral water. In one shot I even shoot upwards, coughing and sputtering and blowing the water out of my nose into my pruned hands “I haven’t gotten water up my nose like that since I was six years old,” I cough. Eric ‘s laughter punctuates the entire shot. 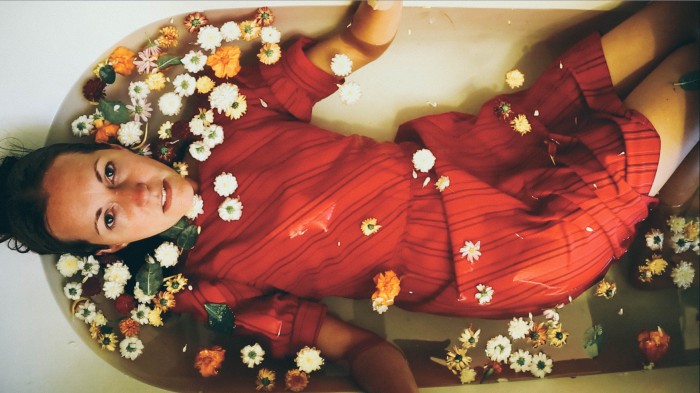 We drained the bathtub in real time. Halfway through the shot we ran out of space on our camera. Eric raced downstairs to dump all of the footage onto our computer -a weekend’s worth of film shoots, while I lay in my drenched dress in a half-filled tepid bath, forced to be stock still. Once the shivering became too much I shouted down to him that I couldn’t take much more… I had to get out. He pleaded with me to hang on. Through my convulsive shivers I told him that I didn’t have much more in me. An evening traipsing through a shaded autumn creek in short sleeves had finally caught up to me. He bounded upstairs with a partially empty card and we finished the shot. My lips are slightly blue and my body looks overcome with discomfort, but I think in the end it added to the authenticity.

One thought on “Behind the scenes of “Soon””