To celebrate Kiku’s first anniversary we released a lush new self-produced Cubist music video for “Trust” -the finale of Kiku. It takes place in the icy alien landscape of the before-life. 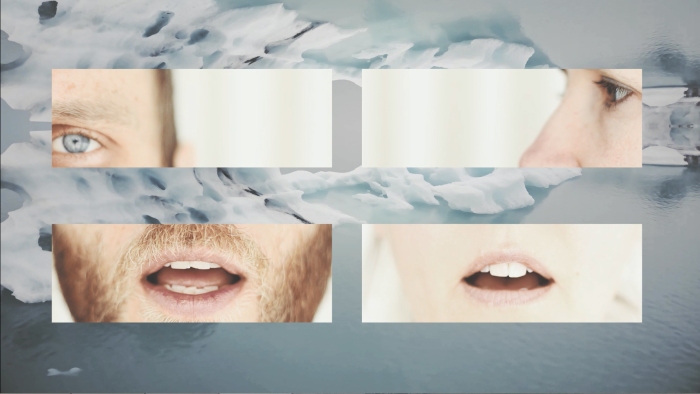 The video imagery was serendipitous. A filmmaker friend of ours, Nate Simms, had just spent some time in Iceland filming the melting glaciers and asked us to score a transcendental short film of the epic luscious scenery. We started playing around, creating a mirror effect that produced an altered universe. We came up with the idea of cutting our faces into geometric shapes over that alien fractal background. We felt like we were creating a Picasso Cubist music video. It wasn’t until we constructed it in its entirety that we realized we had created a metaphor for two people trying and failing to combine themselves into a new human. You can read more background at Week in Pop.

“Creating synergistic hymns of catharsis and healing, The Parlor’s pop odes to the processes of time and understanding loss are witnessed like a winter’s thaw that brings about new shared sensations and realizations that uplift the human spirit to new heights of unbreakable love.” –Week in Pop

In other Parlor related news…since releasing Kiku in April 2018, we toured until this January when we holed up in the studio to score a film. Something Else premieres at the Tribeca Film Festival on April 26th.

Our music is also currently criss-crossing the country in the short film The Great Unknown, starring Olympia Dukakis.